It’s early February, and we’re happy to report that Linen App is improving by leaps and bounds. Our team is burning the candle at both ends to make Linen App a wonderful experience for everyone. Thank you for your unwavering support. It keeps us going!

We want to share several items in our February 2020 update.

We recently kicked off the main Rewards campaign on Republic

The main launch of the Rewards Campaign was in mid-January. The response from our community has been through the roof. We have almost 3,500 Rewards campaign participants at the moment, earning rewards for themselves and their friends and family. A big welcome to everyone!

New to Linen App? You still have the opportunity to join the Rewards campaign and earn future equity for free in Linen Mobile, Inc., which develops Linen App. The end date is April 29, 2020.

The tech that goes into Linen App

If you’re new to Ethereum-based liquidity pools, use our website as a learning resource. We’ve published explanations for tech terms related to Linen App on our website. We have two recommendations:

2. What happens under the hood of Linen App

Check them out and understand the tech that you interact with!

We’re also launching an educational blog series soon. The plan is to cover Decentralized Finance (DeFi) also known as Programmable Finance and other terms connected to Linen App. If you – or someone you know – want an easy-to-understand, light-on-technical-terms introduction to this emerging industry, keep an eye out for our blog!

The Ambassador applications are pouring in

We have 220 well-qualified individuals who requested to become Linen App Ambassadors. They come from some truly diverse backgrounds, ranging from investors and DeFi enthusiasts to influencers and entrepreneurs. They all have one thing in common, however – they’re curious people who want to get involved with Linen App early on.

We definitely were not expecting this level of interest. We’re flattered and humbled. The Ambassador program, if you’re curious, is for early adopters who can spread the word about Linen App. There are several perks to joining the program. Learn more here.

Kudos to the most active community members

Give a round of applause to our most active community members listed below! All of them are getting extra Rewards in the form of future equity in the company that develops Linen App. Read more here. 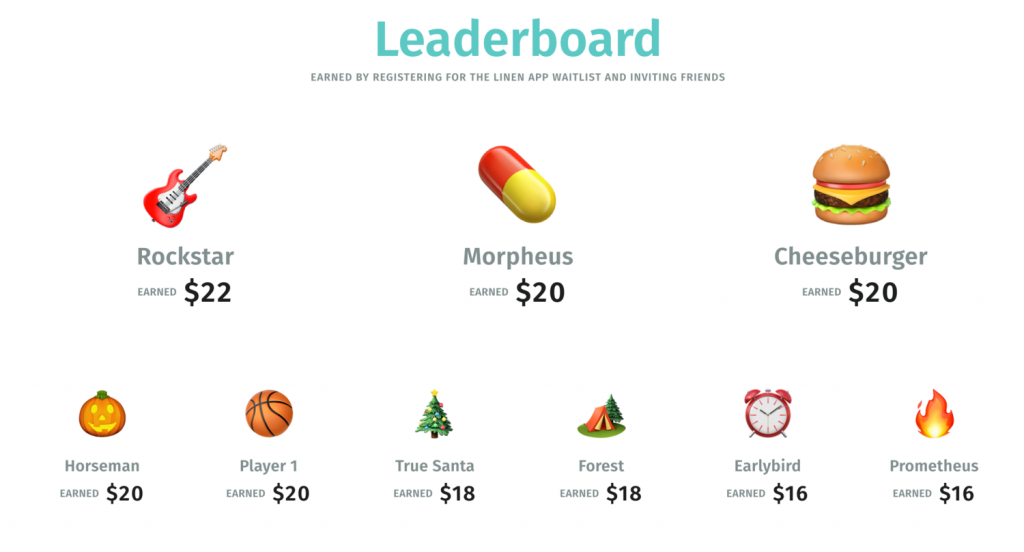 Your personalized referral link is located in the menu of Linen App. You can earn additional Rewards, too 😉

It’s been great receiving feedback and feature requests. We are making a note of all requests and prioritizing our development roadmap based on that. Don’t hesitate to reach out if you have any suggestions. Every suggestion counts.

Finally, we’re hard at work ironing out some bugs. The most notable one is the bank linking issue. We are aware that not all banks are supported for linking to Linen App. Also, some banks do not connect using Plaid. For those who are not aware, Plaid allows consumers to connect their bank accounts to different financial applications and services. The Plaid platform supports approximately 9,600 financial institutions –  from national banks to local credit unions.

We are working on a solution that will allow you to connect your bank and then complete your registration in order to claim Rewards. Reach out to us if you have problems so that  we can notify you once a solution is implemented.

There are a couple of other bugs our community members reported, such as the inability to back up the app and continue registration when you deny permission to “Save Passwords” in Google Smart Lock (Google Password Manager). We are working on this fix, too. Please keep in mind that the Android version of Linen App is waitlist only, and the full version will have a different security mechanism.

That’s all for the February update. Stay tuned for the March update. Thank you for your interest in Linen App! As always, use in-app chat if you have any questions or just want to say “hi.” We’re always excited to hear from our members.